More information, fact sheets and links on why we need #Medicare4All. We also have graphics to share on social media and info on  other ways to promote #Medicare4All. 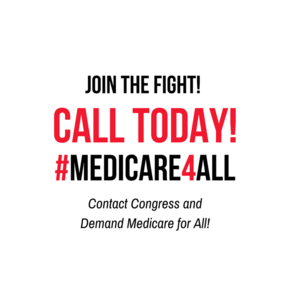 Despite being the most expensive, the United States’ healthcare system ranks #37 in the world for efficiency — the lowest of all industrialized countries. Millions of people in the United States don’t have access to healthcare — and people of color, low-income folks, and people living in rural areas are significantly less likely to receive quality care.

The Affordable Care Act brought healthcare to about 30 million more Americans through private insurance and expanding Medicaid. But that still leaves millions without healthcare. And for those who are insured, private health insurance isn’t the best option. Leaving our healthcare to private companies — where market incentives lead them to limit coverage and raise costs on consumers — is a bad way to run a system. Millions are left struggling to make ends meet or without healthcare entirely. It’s time to change that. ​​

Let’s work together for a universal